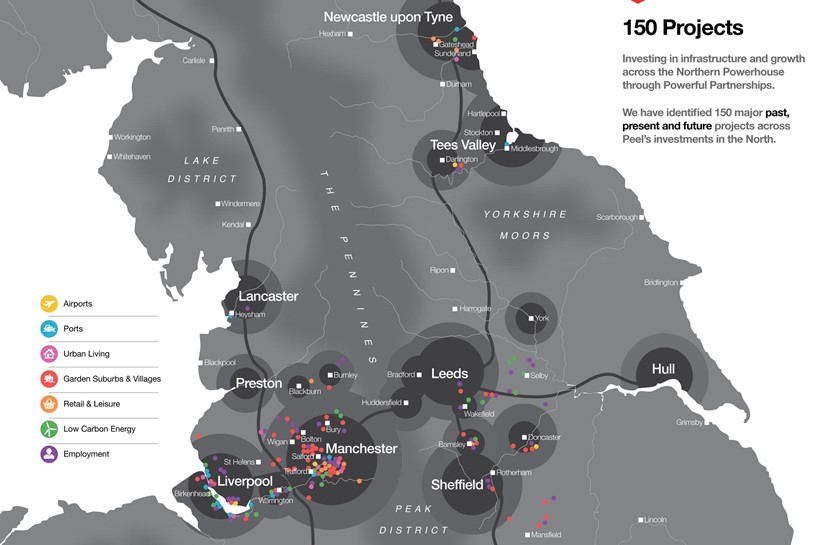 The Peel Group today announced its strong support for the Northern Powerhouse and urged public and private sector partners to work together to deliver the shared ambition for rebalancing the UK economy through significant growth in the North.

The Peel Group is one of the UK’s foremost privately-owned investment enterprises, embracing a broad range of sectors – land and property; transport and logistics; retail and leisure; energy and media. Its investment portfolio across the North includes Manchester’s MediaCityUK; Port Salford; the Port of Liverpool; major regeneration schemes in Liverpool and Wirral, as well as Liverpool’s John Lennon Airport, Robin Hood Airport Doncaster Sheffield and Durham Tees Valley Airport.

John Whittaker, Chairman of The Peel Group, has written to both the Prime Minister and the Chancellor of the Exchequer, outlining the Group’s strategy: “We have a long-term vision for our investments and believe that coupled with the Government’s growth policies and direct investment in infrastructure and skills, our investments can make an important contribution to the aims of the Northern Powerhouse.”
Peel has a proven track record in pioneering regeneration in the North over the past 25 years, with total investments of over £5 billion, supporting 70,000 jobs. There is an additional commitment of £1 billion of investment underway, in partnership with others.

John Whittaker added: “We believe that the Government is making great strides in facilitating a new approach to Northern growth. However, it is clear that more needs to be done to give the private sector the confidence and ability to deliver in the North, across a range of issues such as transport and logistics, communities, energy and resources. We very much look forward to working alongside our many partners, local authorities and the Government to help deliver the Northern Powerhouse.”

Peel is planning to publish an investment prospectus in early 2016, setting out in more detail the contribution that Peel and its partners can make to the North.