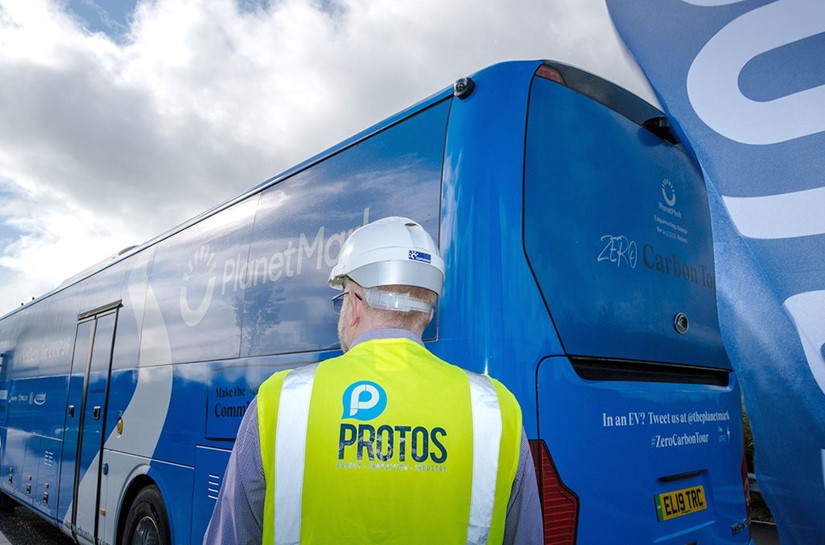 Hydrogen at Protos: 5 ways the North West is pioneering the low carbon economy

This week, the Zero Carbon Tour reached the North West on the road to COP26, the international climate summit set to kick off in Glasgow at the end of October. The so-called ‘battle bus’ – the UK’s first electric coach – made a stop off at Protos, with the tour crew learning all about how the destination is at the heart of low carbon energy production and sustainable use of recyclables.

A key part of the North West’s net zero story is hydrogen … seen by many as a core component of the clean energy future thanks to its use as a zero emission transport fuel. Peel NRE’s Protos, part of Peel L&P, is an energy and innovation hub near Ellesmere Port which is already at the forefront of delivering the hydrogen economy.

It’s all part of a joined-up approach in the region, spearheaded by the North West Hydrogen Alliance, to deliver a whole hydrogen system, from production to consumption. And with the Government releasing its hydrogen strategy, with emerging policy on its mass rollout, the signs are promising.

Here’s five reasons why Protos and the North West are at the vanguard of making hydrogen a reality.

Much has been made of the need to find innovative ways to generate enough hydrogen to heat our industries and homes, and power our transport. At Protos, we’re not only rising to that challenge, but tackling the UK’s plastic problem (with some 4.9 million tonnes of plastic waste created annually).

Protos is set to become home to the UK’s first plastic to hydrogen facility. It’ll use some 35 tonnes of unrecyclable plastic every day to create hydrogen, using Powerhouse Energy’s pioneering technology developed at the neighbouring Thornton Science Park.

We've also submitted a planning application for a Plastic Park to surround the facility, built on the principle of making the most from plastic waste as possible, diverting it from landfill and our oceans! Taken together, the two facilities will create over 130 jobs.

The North West has the geological capability to store hydrogen at scale in underground salt caverns, however these will take a while to consent and deliver.  Having a network of local sources of hydrogen production will reduce the need to transport hydrogen long distances around the country and could help pump-prime the shift to low carbon economies.

The UK’s already committed to ending the sale of diesel and petrol cars by 2030 – just 9 years away! That means we need to work at speed to get a network of alternative fuelling stations in place to power the new wave of vehicles, be it hydrogen or electric.

In reality, this is likely to start with single refuelling stations for fleet vehicles like buses and HGVs. Like in Cheshire East, where the North West’s first hydrogen refuelling station has just launched, initially powering prototype dual-fuel bin trucks for the rounds in Middlewich using solar power. In Liverpool too, where the city region readies to rollout hydrogen buses on its rounds.

One of the big opportunities for hydrogen is the ability to decarbonise heat and power to our energy-intensive industries. Once heavily-reliant on fossil fuels following the industrial revolution, the North West’s manufacturers and industries are now making significant strides to decarbonise and reach net zero.

Protos sits at the heart of the North West’s industrial cluster and Peel NRE is a founding member of Net Zero North West (NZNW) – the industry led collaboration which is rising to the challenge of becoming the UK’s first low carbon industrial cluster by 2030. Protos is one of the key projects identified in the NZNW Economic Investment Prospectus which sets out a £206bn investment case for a pipeline of long-term and shovel ready green investment projects, which could deliver 660,000 jobs.

Protos is also in excellent proximity to the UK’s leading hydrogen and carbon capture  project HyNet North West which could deliver around 80% of the entire UK target of 5GW of Hydrogen by 2030.

5. Linking with industry and education to create a hydrogen skills economy

Protos benefits from strong ties to educational institutions; the hydrogen supply chain; and disruptive start-ups looking to pioneer new technologies. This holistic approach will be vital to making the hydrogen proposition become reality.

Our links to the University of Chester’s neighbouring Thornton Science Park have seen us draw on ground-breaking research and even employ graduates to work on hydrogen policy and opportunities. The birth of Powerhouse Energy’s plastic-to-hydrogen technology is testament to the model of developing and testing a new approach in the lab, and then rolling it out at scale at Protos. Both Peel NRE and the HyNet team now have a base at Thornton.

If the UK is to avoid the mistakes of the past, where opportunities to be a world-leader in low carbon technologies were lost to other countries, we must embrace this opportunity, investing in the right skills to ensure we’re ready to take advantage at the right time.

With the nation’s attention on energy security and the need to go green, Protos and the North West is uniquely placed to both help deliver a hydrogen economy and reap the rewards.