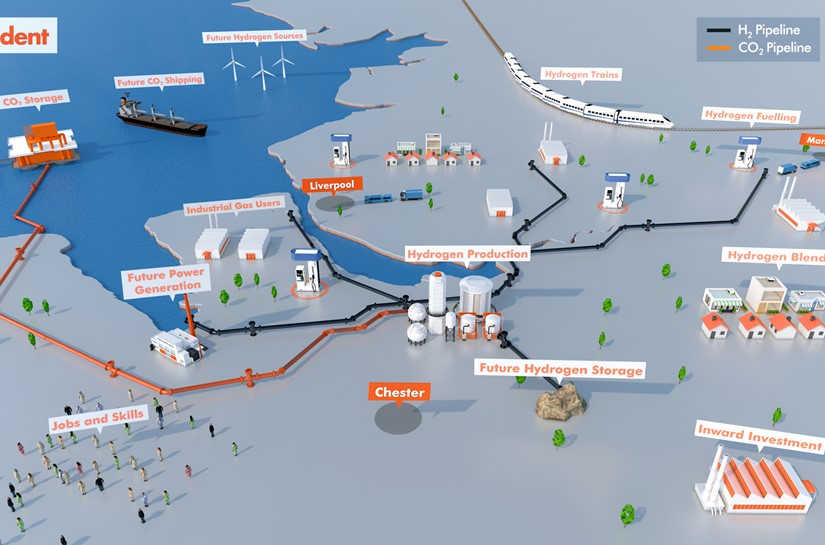 A major infrastructure project that promises huge carbon savings and thousands of jobs for the North West has been awarded over £800,000 in support from UK Government and project partners.

HyNet, supported by Peel L&P among other partners, will capture and store over a million tonnes of carbon dioxide (CO2) from industry and store this offshore in depleted gas fields in Liverpool Bay, which are currently operated by Eni. HyNet will also subsequently produce hydrogen as a fuel for both heating, power and transport. A UK-first at such large scale, the first phase will be operational by 2024.

Since its launch in May last year, HyNet has attracted significant industry and political support, both regionally and from Westminster. Peel L&P is part of a consortium led by the UK’s biggest gas distribution network Cadent and project developer Progressive Energy, and also includes Essar Oil UK, CF Fertilisers, Peel L&P and the University of Chester.

The financial support from the Department for Business, Energy and Industrial Strategy (BEIS) enables the HyNet consortium to begin the next phase of engineering design for the Carbon Capture and Storage (CCS) element of the project. This CCS infrastructure is the critical enabler for decarbonisation of the major parts of the North West economy.

“The delivery of this project to assess scale carbon capture and storage in the North West is a critically important step in the development of a regional decarbonised industrial cluster. Our Protos development is already delivering projects which contribute to reductions in CO2 and HyNet will further enable our ambition to be CCUS-ready.”

Energy intensive industry in the North West operates in a competitive global market, and is subject to UK and EU carbon ‘taxes’. The new CCS infrastructure will not only enable long-term, low carbon production but will help both maintain existing, and attract new, industry to the region.

The first phase of the HyNet project would see around £300 million invested in constructing CCS infrastructure. Longer term, the overall investment in CCS and hydrogen infrastructure in the region is planned to reach around £1 billion.

This will bring a range of economic benefits, including up to 5,000 jobs from the planning, construction and ongoing operation of these new facilities, with the prospect of more jobs and investment as the technology rolls out to other regions of the UK.

HyNet is also being supported by the North West Business Leadership Team (NWBLT), which recently announced its response to the Government’s challenge to establish a Low Carbon Industrial ‘Cluster’ by 2030. The goal set by Government is to establish a low-carbon exemplar that others in the UK and internationally can learn from and replicate. HyNet forms a major part of the NWBLT bid, and is supported by private and public sector partners from across the Liverpool City Region, Cheshire and Warrington, and Greater Manchester.

“This a critical step towards achieving huge carbon savings for UK industry and to enable its clean growth. HyNet is game-changing and positions the North West as a world leader in carbon capture and hydrogen technologies. With a range of partners, we are building a project here that will help decarbonise heat in homes and industry, along with providing cleaner fuel for transport like trains and buses.”

Richard Carter, Chairman of the North West Business Leadership Team, welcomed the news of the award:

“We firmly believe that we have the opportunity to build a powerful collaboration in the North West of which HyNet is a crucial part. Working together we can create an innovative, sustainable and low-cost energy system that will help to deliver an increasingly decarbonised future. It will also contribute to energy security and the sort of sustainable economic growth that will be of benefit to local communities also. This announcement is an important first step on that journey – and places the North West in the vanguard of this new technology.”

Garfield Southall, Executive Dean of the Faculty of Science and Engineering at the University of Chester’s Thornton Science Park, added:

“The University is very excited to be a partner in this project, which will boost the competitiveness of our North West industrial cluster, attract inward investment, deliver skills and innovation that can support the realisation of a low carbon global economy for a low carbon glow.  With Dr Carolina Font-Palma and Professor Joe Howe at the University, and all partners working together, I believe that we can accelerate the cost-effective deployment of ‘at scale’ industrial decarbonisation by the mid-2020s.”

“This is a very important initiative and we look forward to playing our part in this consortium working towards the decarbonisation of energy intensive industry.”

More information on HyNet is at www.hynet.co.uk