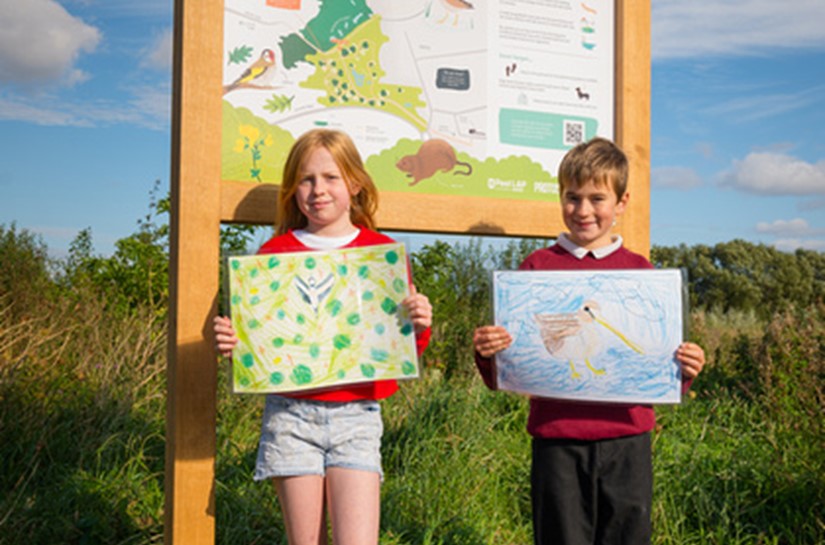 Peel Environmental – part of Peel L&P – has launched two nature areas at its Protos site in Ince. The nature areas were officially opened at an event with Elton Primary School where the winners of a logo competition were revealed.

Snipe Haven and Goldfinch Meadows are two purpose-built habitats which are home to an array of flowers, butterflies and birds. The two winning logos – created by Jessica Plummer, 10 and Jack Rhodes, 10 – are displayed on new wayfinding and information signs located along Marsh Lane and on the footpaths within Goldfinch Meadows. The logos were created following a visit by Elton Primary School to the nature areas, hosted by Cheshire Wildlife Trust, where Class 5 students learnt about Goldfinches and Snipes.

Jane Gaston, Development Director at Protos said: “We’re thrilled to be officially launching the nature areas at Protos. While many local people have already been exploring the habitats for a while, we hope the new signs will help the community enjoy them even more.

“It’s been a real pleasure to work with the children and teachers at Elton Primary School to create logos for the new areas – Snipe Haven and Goldfinch Meadows – and congratulations to the winners.”

Over 50 hectares of land is being dedicated to habitat creation at the strategic energy hub Protos, where over 2600 trees have already been planted. The area is rich in nature with an array of flowers, butterflies and birds. Large constructed ponds and scrapes with wetland fringes give the perfect environment for water dwelling wildlife.

Lydia Mathison, teacher at Elton Primary School said: “We are delighted to have been a part of this fantastic project. The children really enjoyed the experience and it was a brilliant opportunity to open their eyes to types of wildlife in the local area. It is great for our children to have played such a huge part in the advertisement of these new nature areas.”

The areas will be regularly monitored and managed to encourage a diverse range of species to the site. Local people can explore Goldfinch Meadows on their own or follow one of the walking routes. The footpaths allow people to enjoy an area rich in native trees and an array of flowers, butterflies and birds. Snipe Haven is an extensive area entirely dedicated to nature, with habitats created particularly for water voles and wading birds. To help protect these species, Snipe Haven is not open to the public.

Further information on the nature areas, including a downloadable map, can be found at www.protos.co.uk/nature. Visitors to the nature areas can access seasonal updates from a QR code found on the new signs. Access to the Goldfinch Meadows is along Marsh Lane from Ince Village on the west, or from Frodsham on the east. National Cycle Network route 5 runs adjacent to the nature areas.