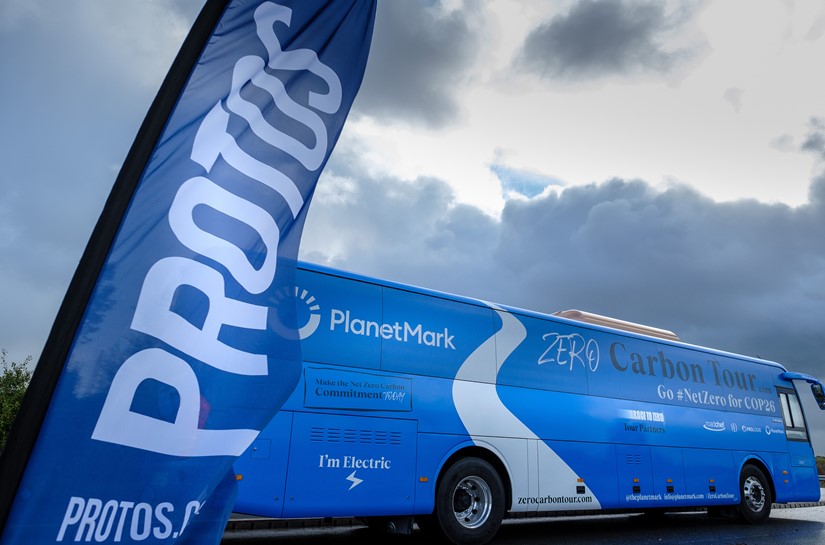 With less than a month to go until COP26, the Zero Carbon Tour reached Protos! The big, blue, all-electric bus made a stop at Protos, near Ellesmere Port, to see the work underway to develop a hub for energy innovation.

The Planet Mark team set off from Cornwall and are touring the UK on the road to Glasgow, taking in the progress being made to cut the UK’s carbon emissions.

We were joined by Gemma Davies and Cllr Matt Bryan from Cheshire West and Chester Council, alongside Joe Manning from the Cheshire & Warrington LEP, as the bus pulled in to check out progress on site.

We were thrilled to showcase the low-carbon initiatives already developed, including the Protos wind farm and operational biomass facility, as well as discuss some of the exciting projects on the horizon, including the UK’s first Plastic-to-Hydrogen facility using Powerhouse Energy’s technology.

“It was a real honour for Protos to be the first North West stop on the Zero Carbon Tour. Protos is the perfect demonstration of a project at the forefront of leading the transition to net zero, not only have we delivered several sustainable energy generation projects, we’ve also got a series of ‘firsts’ in the pipeline.

“The tour team were really interested in the upcoming hydrogen production facility that will use Powerhouse Energy technology to turn plastic into a new transport fuel. It’ll kick-start the rollout of hydrogen in the area, seen as a key part of unlocking the low-carbon future.”

The site tour was followed by a flagship event at Thornton Science Park neighbouring Protos.