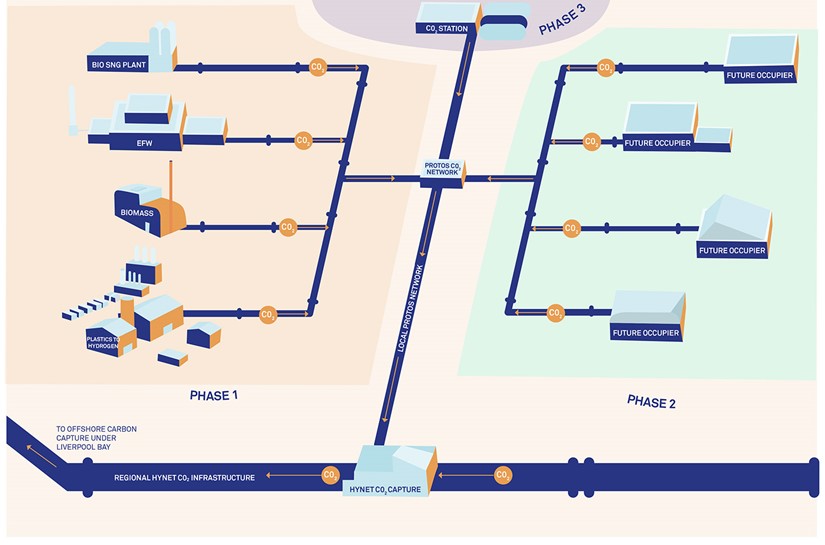 We often take inspiration from the patterns of nature. The humble tree was mine as I reflected on our latest Protos news. Just like trees perform an essential role in taking CO2 out of the atmosphere, so too will major new carbon capture infrastructure for the North West.

Targeted to be operational by the end of 2025, the HyNet carbon dioxide pipeline will transport CO2 emissions captured from existing local industry to be permanently stored offshore in depleted gas reservoirs under Liverpool Bay.

This main pipeline will be the trunk of a tree-like structure. Traversing the area around Ellesmere Port, it will connect to a hydrogen production plant at Stanlow as well as major industries that span its length.

But with this central trunk comes the opportunities for new shoots. Enter Protos. We’ve just announced plans for a network of smaller, local CO2 pipelines at Protos, with feasibility studies underway.

With a single connection point onto the nearby HyNet regional pipeline, our network would branch off. A secondary, smaller-scale network, it would connect directly to energy generators and capture their emissions. Our initial studies show this network could capture some 800,000 tonnes of CO2 per year – equivalent to carbon sequestered by over 13 million tree seedlings grown for 10 years.

In this approach, we (Peel NRE) are looking to create one of the first carbon-capture ready destinations in the UK, with surrounding development plots attracting new industries. They’ll be energy generators and industries making key decisions now about how they’ll operate in a net zero Britain, with the option to connect directly to an existing network.

We’re already working closely with regional partners and know the demand is only going to grow as our looming legal climate change limits get ever closer.

There’s significant benefits to pioneering this ‘local’ approach to carbon capture. Firstly, it means the pipeline infrastructure can be rationalised and coordinated, avoiding expensive and timely retrofits. Planning a joined-up network means we can site the pipelines in appropriate locations and serve several users – rather than multiple separate pipelines for multiple businesses, all planned and built individually resulting in a hodgepodge of connections.

What’s more, the strategic location of Protos means it opens up the potential for carbon capture to industries in communities not directly on the regional network. Our studies are looking at the potential to bring CO2 via the Manchester Ship Canal and even rail. It’s a pioneering approach that, if possible, could even further underpin the central role of carbon capture in the UK’s energy future and extend the reach of planned investments.

It's the same story as many other sectors. Whilst the focus is, rightly, on the major national-scale projects, it’s often what’s happening at a local level that helps drive extended benefits.

This branch-like network could well set a blueprint to be replicated elsewhere in the UK.

Our next steps will include continued feasibility and detailed designs ahead of investment decisions next year.

The seeds of making carbon capture a reality in the UK have already been sown. Now’s the time to make key decisions about how and where the industry will blossom.

Read more about our plans for the Protos CO2 network here.