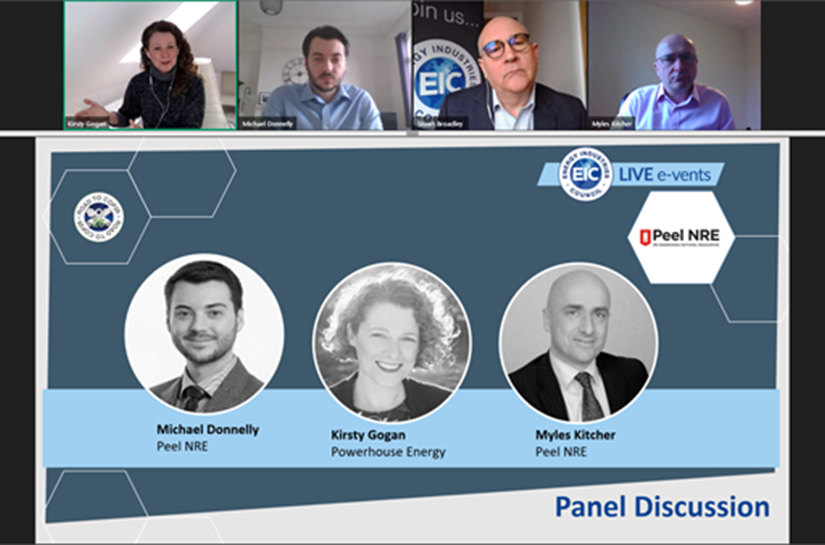 As we get closer to COP26, decarbonisation is top of the agenda for many people and organisations. Myles Kitcher, Executive Director of Peel NRE, part of Peel L&P, talked about how Protos is supporting the Net Zero agenda by delivering low carbon energy and sustainable options for managing waste. He explained how Peel NRE, which brings together the skills of the energy, environmental, and water teams, was recently launched, helping to drive the nation’s clean growth agenda and post-COVID green recovery.

A key talking point was that energy doesn’t just mean electricity. At Protos, it also means hydrogen. Kirsty Gogan from Powerhouse Energy introduced attendees to the waste plastic to hydrogen facility being built at Protos.

She said: “We do need to reduce consumption of plastic, but the reality is that we have a material and large-scale problem now, and this technology is available now.

“We also have a real challenge with our Net Zero targets. It’s a bit of a chicken and egg situation, particularly for transport. We need our transport fleets to make the investment to switch to cleaner fuels, but we also need to supply those fuels.”

Powerhouse Energy’s facility will convert up to 40 tonnes of plastic that has reached the end of its usable life into two tonnes of hydrogen per day. This is the same as taking a third of the plastic waste generated by the city of Liverpool each day, and powering two thirds of the homes in Liverpool.

The Net Zero target is at the heart of so many conversations right now, one worrying note to emerge from the event was that four in ten attendees don’t think we’ll reach Net Zero by 2050. This could be due to the majority of people (81%) believing the Government isn’t doing enough to reach Net Zero. At the same time, however, only 43% thought Government Policy would be the main driver of Net Zero. Others thought decarbonising industry (20%), consumers (14%) or new technology (9%) would be the answer.

Despite the confusion over what would lead to Net Zero and who is responsible, James Moat of Box Energi praised the Government for all it had done to incentivise electric vehicles. He argued that it was time for industry to take over decarbonising transport: “The Government has done enough. It’s now down to us as individuals and companies to see how we’ll progress over the next few years.”

Attendees heard about Mersey Heat, a district heating network on the Liverpool waterfront connecting up to 9,000 homes and 315,000 square metres of commercial space at Peel L&P’s £5bn Liverpool Waters development and the surrounding area. The Government estimates that 14% of the UK’s heat demands will be met by district heat networks by 2030, and the Mersey Heat project has an important role to play in making Liverpool a cleaner, greener place to live as well as contributing to national targets.

Decarbonising the more challenging sectors, like heat and transport will be increasingly important due to the target set by the North West to become Net Zero by 2040. COP26 brings into sharp focus the challenges ahead. What is clear is that there isn’t specific actions or organisations that will get us to Net Zero. Government, industry, consumers and academic institutions from across the UK need to work together to meet this challenge.