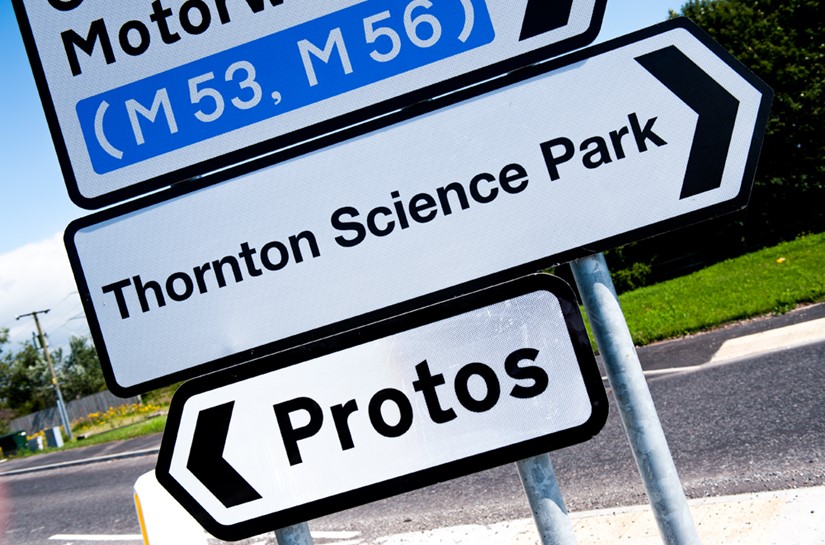 As 2019 draws to a close, Development Director Jane Gaston sums up what’s been quite a busy year for the Protos team.

This year has been a pivotal year for the future of clean energy, with the UK Government nailing its colours to the mast with ambitious, but necessary, targets to bring the UK’s carbon emissions to net zero by 2050. The gauntlet has been laid down to high energy use locations such as the North West and this year Protos has definitely risen to the challenge.

We’ve made massive progress in 2019 with the Ince Bio Power biomass facility becoming operational. Owned by Bioenergy Infrastructure Group it uses waste wood to generate enough electricity to power over 40,000 homes, saving emissions which would equate to taking 40,000 cars off the road.

This year also saw plans by Progressive Energy to deliver the UK’s first commercial scale Bio-Substitute Natural Gas (BioSNG) plant at Protos approved by Cheshire West & Chester Council. The £150m plant will use up to 175,000 tonnes of bioresources (including unrecyclable wood) to create renewable gas for up to 1,000 low carbon HGVs and buses each year. Set to start on site next year, the plant could be the first of many built across the country, making a huge contribution to the decarbonisation of the transport sector.

Among many firsts planned at Protos, one of the most exciting is Waste2Tricity’s plastics-to-hydrogen project which is making in-roads into one of the biggest challenges of our time – waste plastics. Plans were revealed for the £7m facility earlier this year, which when up-and-running, will turn 25 tonnes of unrecyclable plastic into hydrogen. This hydrogen can then be used to power buses, HGVS and eventually cars, helping to reduce air pollution and improve air quality on our roads.

Alongside finding a use for plastic that otherwise would have ended up in landfill and reducing transport emissions, the plant is set to also generate electricity which could then be used to supply local businesses.

Protos is also acting as a host for the ground-breaking research of other organisations. The British Geological Survey believes in-depth knowledge of the ground beneath our feet could reveal insight into future energy sources, as well as a greater understanding of humanity’s impact on our environment. They were given the green light to drill 50 boreholes to track the movement of the geological core. Nine of these boreholes are on Protos land and are being used to house delicate sensors tracking rock movement and water data, as well as yielding deep rock samples, the data from which will be openly available.

We were also delighted to launch two nature areas at Protos this year. Part of the 50 hectares protected for wildlife on the site, Goldfinch Meadows and Snipe Haven are open for the public to enjoy with new signs providing information on the species you can see there. We worked closely with Cheshire Wildlife Trust who are helping us manage the habitats and Elton Primary School, whose pupils provided the brilliant logos for the signs.

Activity at Protos is set to ramp up even further as we enter a new decade. Expect to see spades in the ground and further partnerships revealed. We’ll be bringing more innovative technologies to the site which can help in the battle against climate change and support the manufacturing businesses that make the North West thrive. If 2019 was the year that everyone was talking about net zero, 2020 absolutely needs to be the year that we deliver.